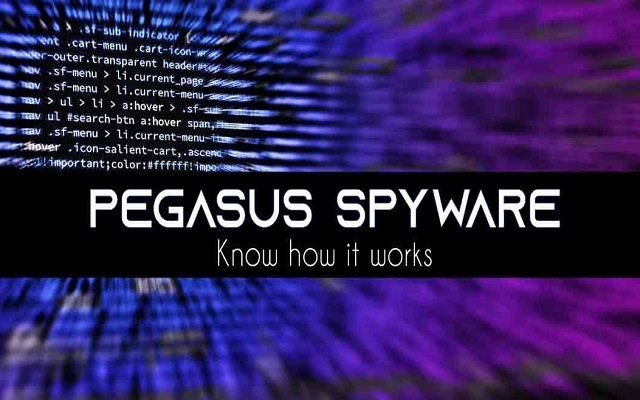 Since a worldwide media investigation claimed Pegasus software was used to spy on the phones of human rights activists, journalists, and even heads of state, leading the Israeli corporation NSO Group to be the subject of intense scrutiny. Pegasus, the company’s flagship product, is spyware that can infiltrate a Smartphone undetected and obtain access to everything on it, including the camera and microphone. Pegasus is meant to penetrate and spy on devices running Android, Blackberry, iOS, and Symbian operating systems. The company says it sells Pegasus only to governments and only for the purposes of tracking criminals and terrorists. Researchers at Citizen Lab, a Canadian cyber security watchdog group, discovered the flaw while examining a Saudi activist’s phone that had been hacked using the code.

Pegasus may theoretically harvest any data from the device and communicate it back to the attacker once it is installed. Photos and videos, audio and video recordings, location information, conversations, web searches, passwords, phone logs, and social media postings are all prone to exploitation. It can also turn on cameras and microphones for real-time monitoring without the user’s knowledge or consent.

Pegasus Spyware a move towards Cyberwar?

A cyberwar is when countries want to intentionally damage other countries through cyber infrastructure. Only a few cyber attacks get classified as cyberwar, while the rest are classified as cybercrime. The actors in the play and their goals, as well as the extent of an attack’s impact, are usually the determining factors.

Few cybersecurity analysts claim NotPetya will turn out to be a one-time disaster. After all, just a month before that infection, North Korean hackers developed WannaCry, a ransomware worm that was nearly as catastrophic. It brought down networks as widely flung as Chinese universities, Indian police departments, and even the National Health Service in the United Kingdom, cancelling thousands of medical appointments and costing between four and eight billion dollars. The Cybersecurity and Infrastructure Security Agency (CISA) equates cyberwar with weakening or deconstructing a government by affecting key infrastructure and has issued advisories on both China and Russia, according to The Goals of Cyberwars. This means that malicious individuals interested in participating in a cyberwar do so with the goal of causing damage to nation-state infrastructure and spying.

Who has been using Pegasus and why?

According to NSO Group, Pegasus is built primarily for governments to utilize in counter-terrorism and law enforcement operations. It is marketed as a targeted espionage tool for tracking criminals and terrorists rather than for bulk monitoring, according to the manufacturer. The corporation does not reveal who its customers are. The Pegasus Project, a media consortium, researched the phone numbers on the list and found over 1,000 persons in over 50 countries. People who appear to fall outside of the NSO Group’s prohibition on criminal and terrorism investigations were discovered. Politicians, government employees, journalists, human rights campaigners, corporate leaders, and members of the Arab royal family are among them.

How does the Spyware work?

Pegasus was previously loaded on cellphones through flaws in widely used applications or spear-phishing, which includes fooling a target user into following a link or opening a document that discreetly installs the malware. It may also be deployed manually if an agent can seize the target’s phone from a nearby wireless transmitter.

Pegasus users have been able to install the software on cellphones with a missed WhatsApp call since 2019, and can even wipe the missed call’s record, making it tough for the phone’s owner to realize anything is wrong. Another method is to send a message to a user’s phone which does not generate a notification.

Pegasus may theoretically harvest any data from a device and send it back to the attacker after it has been installed. It has the ability to steal images and videos, as well as recordings, location data, conversations, online searches, passwords, phone logs, and social network postings. It may also turn on cameras and microphones in real time without the user’s knowledge and consent.

There are legal measures for conveying and preventing access to digitally stored information when it comes to national security and public safety. The Pegasus Spyware is completely private, and it begins lives that have no bearing on public issues. Software-acquired data has been used to negotiate institutions, steal elections, damage opposition campaigns, and even depose the opposing government. Due to a lack of knowledge and professionals in digital security, this industry is susceptible. Other anti-social groups and terrorists began to make extensive use of online, which gives them with more access points.

Pegasus, a modern surveillance tool that has shook India’s democracy, has highlighted questions about the extent whereby the importance of national security might be utilized as a shield by citizens in the state for surveillance. As a result, it defends national security in the Pegasus controversy. It also compels the Indian government to follow international democratic rules governing surveillance technology.

In a statement, the NSO organizations stated that they only sell the eavesdropping spyware to intelligence agencies and the government. The union government, on the other hand, has refused to confess to deploying Pegasus malware or engaging with the NSO organization. Ashbin Vishnu said in parliament that there are established processes and regulations via which lawful electronic communication interception is carried out for national security and safety. He also cited Section 5(2) of the Indian Telegraph Act, 1885, Section 69 of the Information Technology Act, and the Information Technology Rules, 2008 (procedure and safeguards for the interception, decryption, and monitoring of Information) as time-honored protocols for legal interception by the competent authorities.

Can we achieve Cyberpeace?

How could humans avoid a chaotic future of perpetual, widespread digital warfare, given the apparently inevitable rise of cyberwar’s destructive potential. The most evident approach is stronger cybersecurity: critical infrastructure owners in both the public and private sectors should undoubtedly invest more in hardening their networks and isolating critical systems from the internet when possible. However, in cyberwar, like in the greater game of cybersecurity, the attacker has the upper hand: no defensive solution will be able to prevent all future intrusions.

However, cyberwar experts argue that traditional deterrence must also play a role. When a country launches a cyberattack that crosses some form of red line defining global norms for acceptable and unacceptable hacking actions, substantial consequences must follow. Governments have been hesitant to join cyberwar limitation agreements because they do not want to restrict their own ability to wage cyberattacks against their adversaries.

The United States and other world powers have yet to comprehend that an exchange of scorched-earth cyberattacks will cost them more than it would gain them. Until they do, the cyberwar machine will continue to roll forward, destroying everything in its path, including modern civilization’s infrastructure.

Cyber warfare is a hot topic right now, and it’s likely to become a weapon in future battles. There is no need to send armed men into canals and over borders to conquer any other country as the misery of war becomes conditional internet. Instead of firearms and missiles, future conflicts will be fought by hackers and terrorists who will use computer software to destroy the enemy’s infrastructure or steal data from other countries in order to accomplish their political goals.

The most recent example is the Pegasus spyware. A legal framework for the surveillance of hacker spyware is urgently required. The current issue demonstrates that a strong legal framework is urgently needed to deal with future cyber-warfare situations. Because the government appears to be unaware of the massive unlawful hacking, there is an indirect de-democratization in the shadows.

5. The Conversation, What is Pegasus? A cybersecurity expert explains how the spyware invades phones and what it does when it gets in (August 09, 2021) https://theconversation.com/what-is-pegasus-a-cybersecurity-expert-explains-how-the-spyware-invades-phones-and-what-it-does-when-it-gets-in-165382

Primer on Fintech Industry in India

GST – Applicability of unjust enrichment for refund filed for export...